Disclaimer: There is no implied endorsement or connection (formal or informal) with E-Stim Systems Ltd.

Here I describe how to use E-Stereo together with the 2B and explain the design considerations of the e-stim audio server. I suppose that other power modules will give similar results,  I hope.

How does E-Stereo differ from MP3 files.

The E-Stereo server cannot be compared to an MP3 file. Using MP3 you have only one control; The Channel Level controls of your e-stim power box.  An MP3 file that brought on a hands free orgasm one day could be boring and leave you unsatisfied the next day. You cannot adjust any nuances or get that stimulation that works for you from an MP3 either it has it or has not. In contrast the E-Stereo server is versatile in its adjustment capabilities of the signal.  We serve random waves, in frequency, duration and patterns and you adjust these waves so that they are irresistible to you. Although the feel is similar you cannot predict how the patterns develop they are randomised, in contrast a MP3 file is fully predictable after you used it. In short E-Stereo tries to remove any mechanic feel of monotonous repetitions and be adjustable to your mood.

Matching the 2B to the Audio Device

You are presented with two option, the grey [exit] button and the [on/off] button now shaded red. after connecting the 2B and your device (laptop, tablet, phone) with the audio cable click on the [on/off] button which now is shaded green, indicating that the calibration signal is served.

Select Stereo Mode on the 2B, and match the 2B with your audio device.

Adjust your audio device’s volume control so that the last 2 bars are off, permanently. You want the third last bar to flicker on/off. On my iPad that is about 80 to 90% of the volume control. This control is not critical if you cannot achieve this value, the 2B’s Channel Level Controls will compensate. The important thing is you do not want to saturate or over-drive the 2B.

When you are satisfied,  click the green [on/off] button and the fun is about to start. You are presented with an interactive picture and a number of slider control.

Important: Do not touch your audio device’s volume control after this, use only the 2B’s  and the E-Stereo provided adjustments.

A quick summary of the slider controls:

The level controls are initially set at 60. Leave them there. Their function is to increase/decrease output level. In a certain sense they supplement the 2B’s Channel Level Controls. From the below figure you can see how the interactive display gives you a visual presentation of the adjustment. 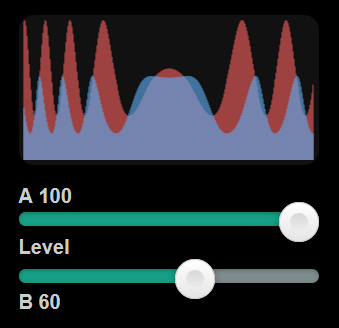 The higher the level you will experience more power in the electro-stimulation signal.

This control controls the depth of the power modulation that you will experience. 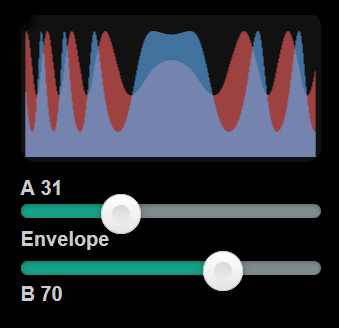 Here the Level Control of both channels are at the same value but the Envelope Controls are at different values. Channel A maintains a higher stimulation in the low periods, whereas Channel B powers down to much lower levels. The design idea here is to compensate for the threshold of feeling an e-stim signal as it varies from person to person, varies from electrode placement and also varies from day to day for the same electrode placement positions.

You may prefer a stronger [on/off] stimulation (as found in many MP3 files) instead of the smooth wave like transitions. The Wave Control gives you this adjustment. 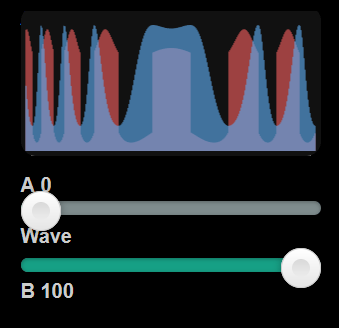 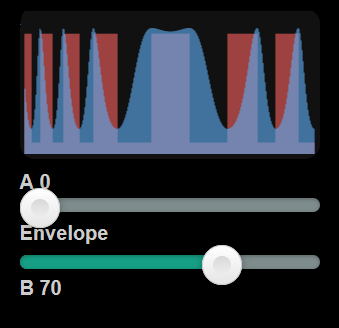 The Hold A Slider Control

At Hold A at zero the signal is not modified, 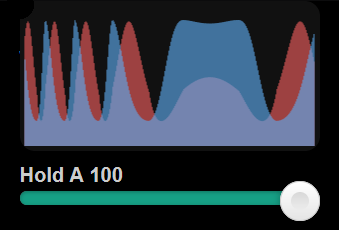 and at 100 we note the broadening of the channel A high power periods.  Channel B is also effected. Try it yourself with the Bounce Slider set to 100.

The Bounce B Slider Control

The Bounce Slider Control adjusts the relationship of the channel-A and channel-B signals. At 100 channel-B is opposite to channel-A. This is only true of the A not B Control is set to zero, i.e mid position. 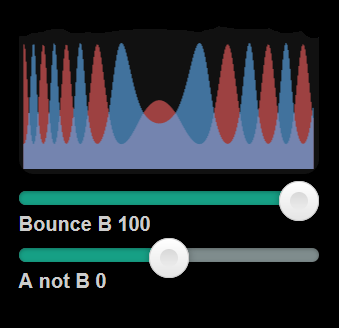 Adjusting this slider to zero then channel-B equals channel-A, i.e. the equivalent of a mono audio signal.

The A not B Slider Control

The monotony of synchronised channel-A and B signals is broken by this control. More interesting e-stim effect can be obtained with the use of the A not B Control. 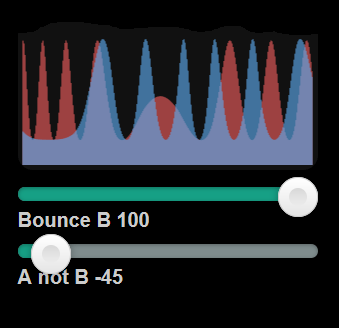 and towards the other end 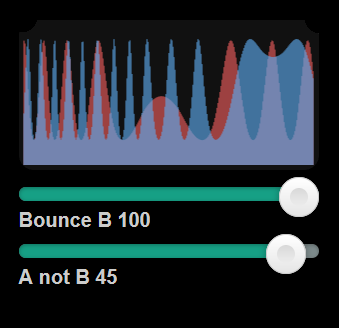 The Teaser Controls consist of three controls, that have no visual feedback. 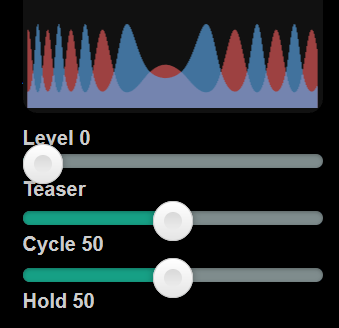 The purpose of the Teaser is to vary the overall output in a slow and quasi random fashion. It slowly modulates the signal to increase/decrease the overall power.

Teaser Level: The difference between the the high power and low power is adjusted by the Teaser Level slider. Depending on the Level Controls, the very first described in this section, and the 2b’s settings the teaser output could be over powering if you change the Teaser Level do it carefully, it may not feel a response as at the time of adjustment it may be in a low power mode of its cycle and could a minute or two come into effect, so be warned.  Adjust it slowly upwards, wait, and then increase again. You may also at higher Teaser Level reduce the Level controls for added teasing effect.

Teaser Cycle: This control speeds up or slows down the teaser cycles, at low levels it is cycles faster and at 100 is at it slowest, i.e longer periods.

Place the electrodes in your favoured configuration. With both the 2B’s Channel-A and Channel-B in OFF perform do the matching as described earlier. Leave the E-Stereo’s sliders in the default positions.  Start the e-stim session by clicking the red [on/off] button below the set of sliders, which now lights up green indicating that e-stim stereo audio is served.

E-Stereo adjustments during the session.

Leave the Level and Wave sliders where they are, your first adjustment should be the Envelope adjustment. Adjust it to a point where you think you just cannot feel it the low cycles. Let’s say this happens to be 50.  At Envelope = 80 you have “dead” periods with no stimulation and at Envelope = 30 you are missing out of the dynamic range.  Also  you may want to set Bounce nearer to 100.  Settle in for about 5 to 10 minutes and as stated earlier you may want to re-adjust the 2B’s controls and/or the Level Slider Controls.

Unless you desire that A and B oppose each other, adjust the A not B control, try 20, and experience the new feel.

After a good warm up, start using the teaser, and as mentioned early slowly increase it. Use the Level Sliders to reduce the high output, should it become over powering, thereby increasing the Tease effect.

From enjoyment to orgasm

Finally near the end of the session reduce the Envelope settings, to keep the stimulation at some elevated level during the low power modes, and adjust the Teaser Hold nearer to 100